The Watchers: The Compelling Gaze in “The Virgin Suicides” 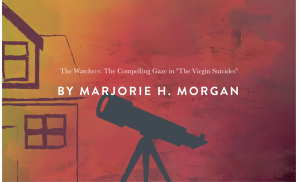 “The Virgin Suicides” film is a feast of watchers: it confirms that we are all watched and we all watch. Like George Orwell’s “Nineteen Eighty-Four,” this film reminds the viewer that we are all under constant surveillance.

Sofia Coppola directs her own screenplay adaptation of the novel by Jeffrey Eugenides from behind the director’s lens, and she uses immense finesse to craft this voyeuristic piece of art that portrays the moral and social decay of a 1970s American neighbourhood. This modernist metadrama observes the theatre of people of all ages closely scrutinising each other; with this approach, Coppola destroys the illusion of reality and demands the critical involvement of the neighbourhood boys (as narrators), and the audience (as spectators) to the whole performance.

The film is ostensibly about the suicides of five teenage sisters, yet death is not purely physical or limited to the siblings. The parents, Mr. and Mrs. Lisbon, both lose their dreams of the perfect suburban family life, and stability of employment and home when the sequential demise of their daughters impact their lives like falling dominoes.

Mrs. Lisbon (Kathleen Turner) is the primary, often overlooked, watcher in this film; she is always on guard against the invasion of uncontrolled life and the influence of the outside community into her fortress home. Mrs. Lisbon uses religion, clothing, and even the physical positioning of her body to shield her family—especially the girls—against the pervading influences of the external environment.

To Mrs. Lisbon, the only safety is to be found in the house where she can monitor the family from close quarters. However, Mrs. Lisbon’s concrete belief in the security of the home is shattered when Cecilia uses the house as a springboard and a landing mat for her own death. This death is the start of the “poison in the air” that invades the entire neighbourhood.

Ronald Lisbon (James Wood) watches and reacts from behind his wife; he is an outsider in his own home, and he sits in the corner of the room while his female family members appear to freely occupy the rest of the house. When other men, such as Trip Fontaine (Josh Hartnett) and the family familiar priest (Scott Glenn), come into the living room of the house, they occupy the outer edges of the designated female portion of the space.

Trip Fontaine is uncomfortably placed in a corner of a sofa and physically blocked from looking at Lux (Kirsten Dunst) by Mrs. Lisbon who observes the movements of all her girls while they are under the gaze of any young male interloper. In contrast, the priest is granted freedom to wander through the house looking for the female occupants without a chaperone—his male gaze has been muted to neutrality by the cloak of religion.

The devastating concept of loss is also experienced by the neighbourhood boys who watch and occasionally socialise with the Lisbon sisters. They are unsuspecting witnesses to the first death, and later they recall the history of their experiences from the prism of adulthood. As grown men, they admit that they have been “scarred forever” with the memories of the past “making us happier with dreams than wives.” Their gaze is subjective because of their distance and their gender.

The five siblings are viewed and treated like raffle prizes; the boys discuss which one they will “win.” The Lisbon girls’ separate identities are shown at the beginning of the film, however, with the exception of Lux, the other siblings behave the same way and look the same with their repeated blond personas. The film projects an overriding white and middle-class sense of perfection that is slowly destroyed.

Despite many whispers and intense speculation, the popular blame for the pervading community decay is firmly placed with the foreign “other” personified by “the immigrant kid” Dominic Palazzolo (Joe Dinicol). Palazzolo is portrayed as both ungodly and worldly because he is quickly captured by uncontrollable passion for Diana Porter—another blond teenage girl in the vicinity—who goes to Switzerland on vacation leaving Palazzolo so bereft that he denounces God and jumps off the roof of his relative’s house as a demonstration of the validity of his love. This mature uninhibited behaviour is viewed as the trigger that sparks the desire to die in Cecilia and her sisters. This causes the main group of male teenage observers to conclude: “We knew the girls were really women in disguise, that they understood love, and even death.”

Everybody—the male and female actors and the audience alike—is captivated by this film that is a meditation on the existential horror of teenage life. We are all voyeuristic and as awkward as the teenagers portrayed because we don’t avert our gaze. We are compelled to watch as the dread of multiple deaths play out in front of our eyes. This is a public yet personal observation because we have all experienced the angst of being a teenager with the ever-present heaviness of being misunderstood.

The film ends with the complex self-reflectivity of the continually self-conscious boys who have been looking at the Lisbons for what seems like their whole lives, but is in the pseudo-reality of the film only a year. One of them symbolically holds a lighter aloft while they stand staring at the mausoleum that the previous summer contained a seemingly normal vibrant family—Lux (the central light) and the symbol of decaying white suburbia is therefore present in the opening and closing scenes of the film as the empty house looks back at them.

The mundane lives and quietly observed deaths are the constant threaded spectacle that Coppola weaves throughout the film: from the neighbourhood boys constantly watching the Lisbon sisters (and even eating popcorn whilst viewing Lux’s nightly sexual trysts) to the local woman who serves refreshments on a tray whilst people watch as the railings where Cecilia was impaled are ceremoniously removed. “The Virgin Suicides” is prime heteronormative theatre and a white cultural spectacle for all observers compelled to watch and who are, at the same time, helpless to do anything about what is taking place.