Caribbean elders are being reclassified as having no status 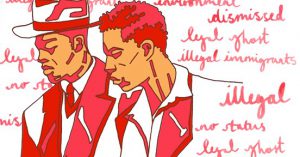 Caribbean British elders who have been resident in the UK for the majority of their lives are among a rising group of people becoming aware of the political terms of ‘legal ghost’ and ‘no status’ because these terms are increasingly and unexpectedly being applied to them.

Many people only know that things have changed for them when they get a letter from their employer, as in the case of 64 year old Renford McIntyre who has been living in the UK for almost fifty years. In 2017 he was officially told that he’s not British and consequently is no longer allowed to work or receive any government support in the form of any social benefit at all. In 2014 Renford McIntyre’s employers asked him to update his paperwork and when it was discovered that he no longer had a valid passport or naturalisation papers, he was dismissed. McIntyre had arrived in the UK in 1968 and followed all legal requirements to be in the country. He arrived a s a British citizen and lived, and worked as such for his entire life.

Following Renford McIntyre’s dismissal from employment he could not get a new job without the requisite papers, so he became depressed, and eventually homeless because his local council, Dudley Council, in the West Midlands, said he was not eligible for emergency housing because according to official records from the legal ghosts he had no right to be in this country.

In an effort to prove his status as a British citizen, Renford McIntyre gathered 35 years of paperwork showing –  among other things – his National Insurance contributions, and sent an application to the Home Office for his retrospective citizenship. Despite this bundle of evidence of his life, his work, his contributions to society and the British infrastructure, the Home Office rejected and returned the application, requesting yet further evidence.

Renford McIntyre is part of a group of people who have lived and contributed to society as British citizens, yet now they are reaching retirement age, after being settled in this country for the majority of their lives, the Home Office is re-classifying them as illegal immigrants with ‘no status’, and thereafter they become ‘legal ghosts’ who are often not recognised by the country they live in or the country of their birth.

The cost of making an application for a visa and citizenship continues to rise. It can now cost £2,297 to become a permanent resident and an additional £1,282 for citizenship – where each person has take a citizenship test that has the most obscure questions including the area of the lakes in the Lake District, and poetry by Lord Byron.

The high costs of visa and citizenship applications appear to be an extra tax on Caribbean British people because a Freedom of Information request has revealed that it costs a maximum of £264 to process an application that is currently charged at £2,297. In September 2017 the Home Office stated it could cost from £135 per citizenship application, yet they are charging up to 900 per cent more on many applications.

In response to the FOI request the Home Office stated, “When setting fees, we also consider the benefits that a successful applicant is likely to gain and believe that it is right that those who use and benefit directly from the system make an appropriate contribution towards meeting associated costs.”  This should not be applicable to this particular group of people who have already spent their lives paying National Insurance and taxes from their earnings.

Additionally the Home Office is now charging £5.48 (payable in advance) for each email it sends in response to customer service enquiries from overseas’ visa applicants. Therefore applicants, including those who have been deported, sometimes within 14 days of notification, have to pay to enquire how to make an application.

These policies are a result of the ‘hostile environment’ that Theresa May said she wanted to introduced for illegal migrants with the Immigration Act that became law on the 12th May 2016.

Paul Blomfield MP, confirmed a report that the  “Tories’ immigration system is based on a reactionary agenda, not reason” (Independent, Sept, 2017) and that the Ombudsman upholds more complaints against the Home Office than any other Government department; evidenced by the enforced inhumane mass deportations, and the inability to assess asylum claims in a fair and timely manner – often overturning decisions after media intervention reminds them of humanity.